This guide explains how to manage consents for the DTP/MenACWY vaccination programme. In particular, it explains the various scenarios that can be encountered and how best to deal with them, to ensure that children can be outcomed appropriately.

This covers both steps in the triage workflow, as well as how to outcome using both the spreadsheet and the mobile.

There are two mixed consent situations that  a parent can create

In either case, the No consent could be for several reasons that the parent can select.

In this situation, the referral would be sent to the spreadsheet or iPad for outcome processing. The No consent would be highlighted as ‘parent declined’ and NO outcomes prefilled.

This means that the clinicians can review the referral, see that the child is due one of the vaccinations, but not the other, and outcome the child appropriately.

Yes consent for both DTP and MenACWY, one subsequently clinically declined by service or by cohort.

When the clinician changes one of the Yes consents to No consent, they would typically select ‘declined clinically, or by service’. If they do this, the other consent will appear on the spreadsheet or the mobile. This means that the child will still be able to receive the one vaccination that they can receive (either DTP or MenACWY).

Dealing with changes in consent

If both vaccinations have consent given, but the clinician decides not to give one of them, then this section explains what needs to happen within RIVIAM workflow:

Why would a clinician decline one of the vaccinations?

This would typically be because either the child has already had the vaccination or there is some medical history which means they should not have it. This will be flagged up within RIVIAM workflow as clinical triage based on the responses included on the eConsent form.

The clinician selects the relevant consent, and then clicks on the Immunisation tab in the left-hand menu: 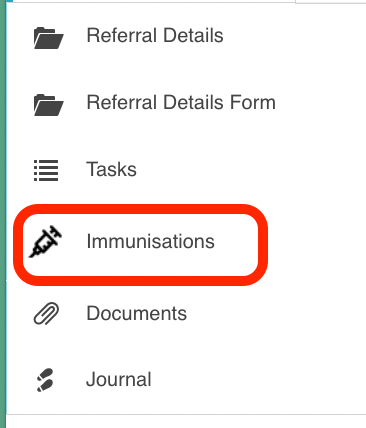 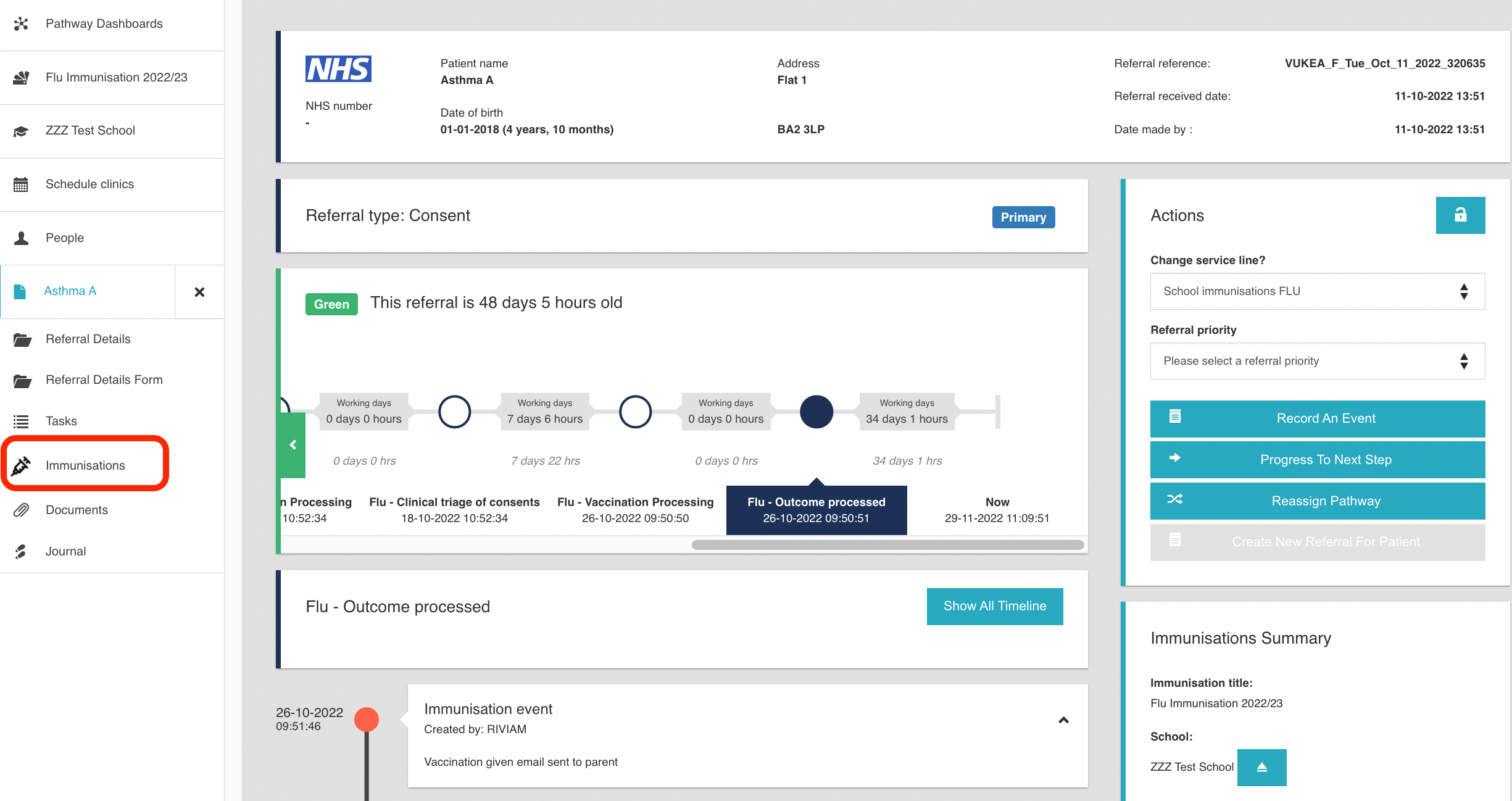 Clicking on confirm will update the record:

This record will now appear on the clinic spreadsheet or mobile clinic and allow the remaining vaccination to be outcomed.

Outcoming YES/NO or NO/YES consents on the spreadsheet

To outcome records on the spreadsheet, start by downloading a clinic spreadsheet. You should see YES/NO or NO/YES entries highlighted in green as follows:

The MenACWY vaccine has been declined, but the DTP vaccine can still be given.

In order to outcome, the information in the top left needs to be filled out fully. This is different to Flu or Covid, as two entries need to be made in each cell for Batch number and expiry date:

The final step is to fill in the outcomes for each of the vaccinations for each referral:

Then the file can be saved and uploaded back into RIVIAM, as normal.

Outcoming YES/NO or NO/YES consents on the mobile

This section describes how to outcome mixed consents on RIVIAM mobile.

The patient Alpha Testlr has a yes consent to DTP and a No consent to MenACWY. 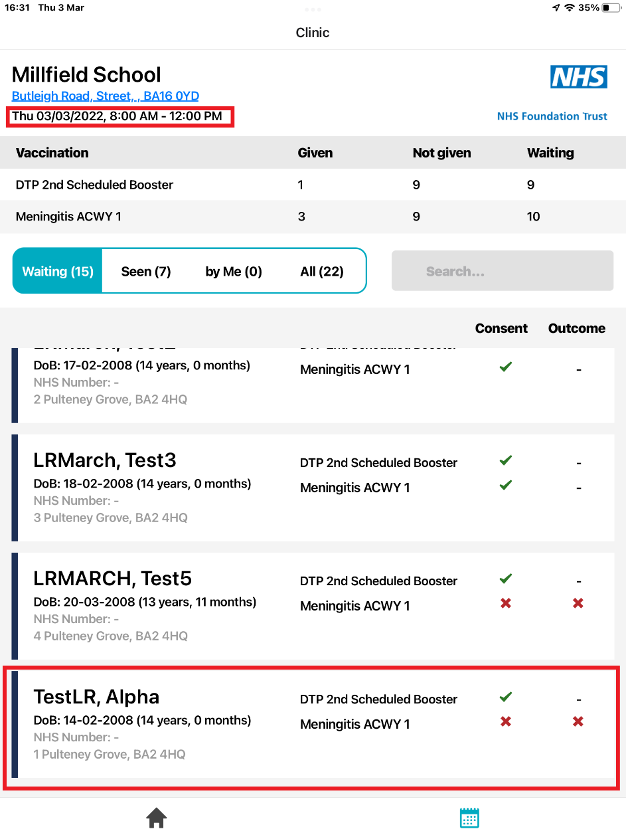 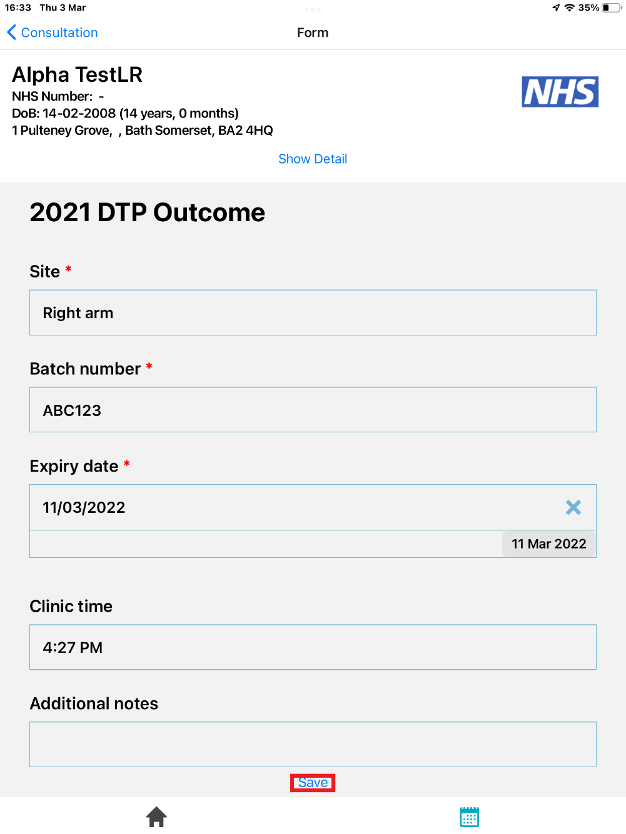 The patient Alpha Testlr will appear in the Clinic but only in the SEEN List. 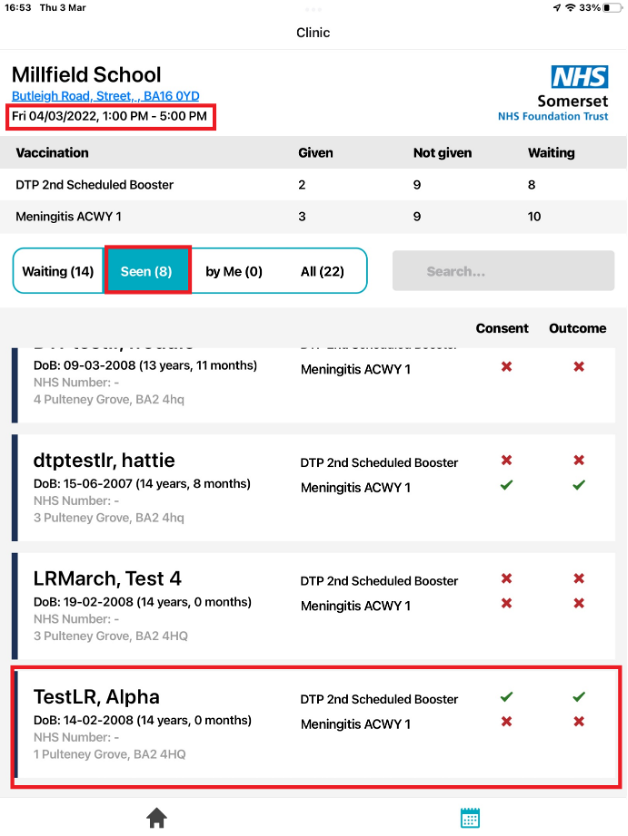 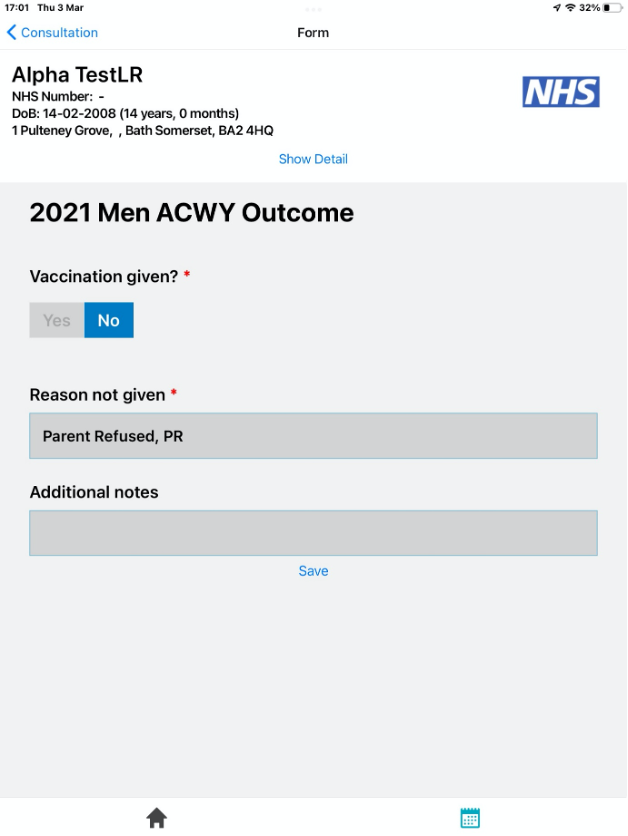